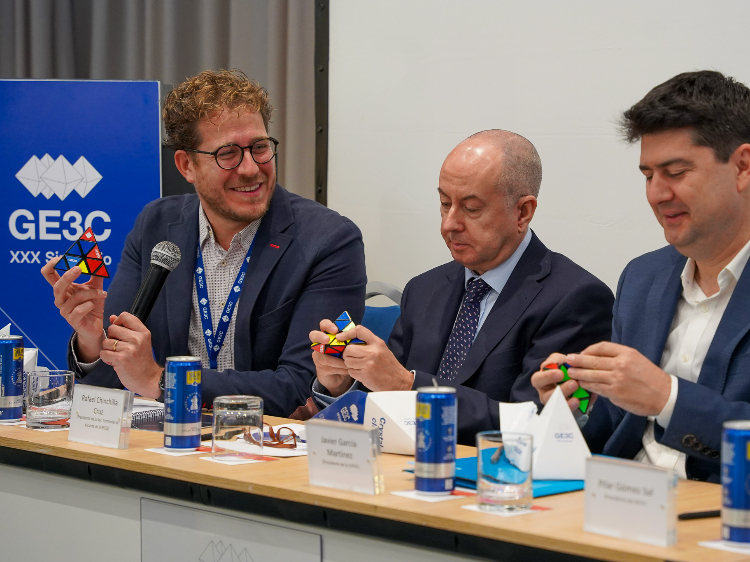 The Group on Crystallography and Crystal Growth (GE3C), which belongs to the Spanish Royal Societies of Chemistry and Physics, is holding its 30th Symposium from 17 to 19 January with the slogan "The next generation: new technologies for new materials and biomolecules", which aims to deepen the scientific discussion on the nature of crystals, basic components that explain much of the world in which we live.

Crystallography is the experimental science that determines the arrangement of atoms in solids. It actually studies the structure of matter and its attractive symmetry. In fact, decades of research have involved crystallographers at the forefront of major discoveries in life sciences, medicinal chemistry, materials science or new technologies, among other relevant fields.

The meeting, the most important in this field of science held annually in Spain, with more than 100 attendees in this edition, has been coordinated by Professor of Inorganic Chemistry at the Universitat Jaume I of Castelló Vicente J. Esteve Cano and Professor Guillermo Mínguez Espallargas, co-leader of the Crystal Engineering Lab (CEL) group of the Institute of Molecular Science of the University of Valencia.

Both took the floor at the presentation of the symposium, at the Hotel Meliá in Benidorm, and after welcoming the attendees, they underlined the great relevance of the discipline, highlighting the important role of young people and new technologies, which today allow us to obtain results that were unthinkable just a few years ago. In particular, the advances that are taking place in electron diffraction have led to the organisation of a specific session on this subject, with the participation of internationally renowned specialists in a round table.

Crystallography is currently facing new challenges in fields such as nanotechnology, giant biological systems and femtochemistry, among others, using new methodologies and new sources of radiation with the appearance of fourth-generation synchrotrons.

Crystallographers describe how atoms are organised in crystals, allowing their properties and behaviour to be deciphered. They use the properties and internal structures of crystals to address some of the most challenging questions in the development of atomic-level knowledge about major biological processes, such as DNA repair, ribosome biogenesis, cell signalling and cancer biology.

By its nature, crystallography reaches into virtually all sciences and has, for example, led to the discovery of numerous drugs. In the last 100 years, 25 Nobel Prizes have been awarded for discoveries in physics, chemistry, biology and medicine that depend to some degree on crystallography, as underlined in 2014, declared by the United Nations General Assembly as the International Year of Crystallography with the slogan "Discover what crystallography can do for you".