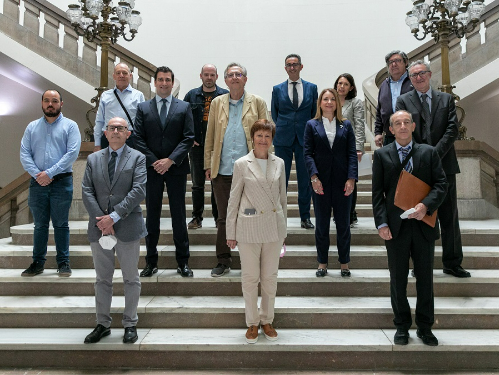 The University of Valencia has recognised the chemical company 2DMatch as a spin-off, promoted by researchers from the Institute of Molecular Science (ICMol). Funded by the University itself and by private capital, the company will develop and market catalysts for the production of green hydrogen at low cost, from abundant and easily available materials, in line with the strategic objectives of the European Union.

The rector of the University of Valencia, Maria Vicenta Mestre, and the partners of 2DMatch have signed this Wednesday, May 11, the patent license contract and the spin-off support and recognition agreement of the new chemical company, which will have its headquarters in the Parc Científic of the academic institution.

“The University is very pleased to participate in business projects such as 2DMatch, which is committed to clean and renewable energy, and to manufacturing processes that are friendly to the environment and sustainability”, said the rector during the act. Master. “It could not be less coming from an excellence research centre such as the ICMol, which right now has several ERCs underway for the chemical design of advanced materials and, with this, there are already two spin-offs that it generates in this field”, she said.

2DMatch was born as a company dedicated to the development and optimisation of two-dimensional materials for applications in the field of energy and, in particular, to obtain green hydrogen from renewable energies, a clean and sustainable alternative based on electrocatalytic techniques, in line with the main objectives of the European Green Deal.

The new spin-off will bring to the market materials for the electrocatalysis of water and the obtaining of renewable hydrogen. Their particularity lies in the fact that they are materials based on abundant and non-geostrategic metals, such as nickel or iron, whose high availability significantly reduces production costs. These, in addition, will be manufactured through an innovative chemical process that allows mass production also at low cost.

2DMatch will bring to the market electrocatalysts made from nickel and iron, whose viability has been widely documented by the scientific literature, but which have not been available so far on the market. "The leap from scientific papers to industry will be possible thanks to a simplified method of synthesis with the aim of improving the production of green hydrogen from solar or wind energy," says Gonzalo Abellán, distinguished researcher of the Gen-T plan of the regional Governement of Valencia and promoter of the initiative together with the director of ICMol and full professor at the University of Valencia, Eugenio Coronado.

In addition to the researchers Coronado and Abellán, the professor of Chemistry-Physics at the University of Cartagena Toribio Fernández Otero, founder of CIDETEC, a private foundation for the transfer of electrochemical technologies, will be part of the company's scientific team; Jorge Romero, researcher in the area of electrochemistry at ICMol and Alvaro Seijas, student of the center itself. They have been joined by financial expert José Rubio and administrator María Pilar Pérez.

"Our business plan and our compounds are perfectly aligned with what the European Commission is looking for, which is to start replacing conventional electrolyzers with a technology that works with abundant and available elements. That's why it's something disruptive," Abellán adds.

Abellán has spent most of his scientific career dedicated to research in this type of materials, also during his postdoctoral stay at the University of Erlangen-Nuremberg, where he created his own research group in two-dimensional materials. But already in 2018 it had the first indications that they could be able to generate these materials in kilos in a scaling laboratory funded by the Valencian Innovation Agency.

The company will also offer customised electrode manufacturing services for electrolysers and batteries, synthesis of two-dimensional materials with transition metals, and consulting, among others.

The University of Valencia currently has 18 recognised spin-offs related to the engineering and technology, life sciences, chemical industry and social sciences and humanities sectors, in line with the diversity of a generalist university.